The incarceration of Mary Mallon as a host of the infectious typhoid fever pathogen was an event which sparked much debate in the early 20th century. Several health officials spoke against her involuntary quarantine at Riverside Hospital on North Brother Island. She was even released from quarantine in 1910 due largely to the efforts of Dr. Ernst Lederle, who had recently taken the post of New York City Health Commissioner. Although this act was intended as a kindness to Mary, it proved to be devastating for the victims of the illness which resulted from her release.

I have witnessed, first hand, the effects of infectious disease and isolation on an infected individual. Granted, the patient that I cared for was not a healthy carrier, like Mary Mallon. Our patient died of the disease nearly 13 months after being admitted to the hospital where I worked in 2012. I did, however, witness this patient’s resentment and feelings of alienation due to the enforced isolation precautions of our facility. For the purposes of simplification and privacy, I will refer to this tuberculosis infected patient under the pseudonym Sam.

Sam was a young man, being only 29 years old when he was admitted to the hospital. He had been diagnosed with a psychological disorder at an early age, and had lived most of his life in a state-funded facility for the disabled. Like many such facilities, the living conditions there were somewhat sub-par and it was, as a rule, over-crowded due to lack of funding. In such living conditions where many people exist in a confined space, tuberculosis is unusually common among its residents. The transmission of tuberculosis from an infected individual to a healthy individual is much rarer in normal, uncrowded circumstance.

Like Mary Mallon, Sam exhibited anger and resentment at his enforced incarceration due to his infection.

His condition was discovered by accident during a routine checkup, at which point the disease was already at an advanced stage with little chance of recovery or survival. Other than his frequent bouts of fatigue and low oxygen saturation levels, Sam had little outward sign of his tuberculosis infection. He was assigned to a negative pressure isolation room. His blood samples, bed linens and everyday effects were handled like biohazards. Anything that entered Sam’s room was destroyed by incineration per hospital policy. 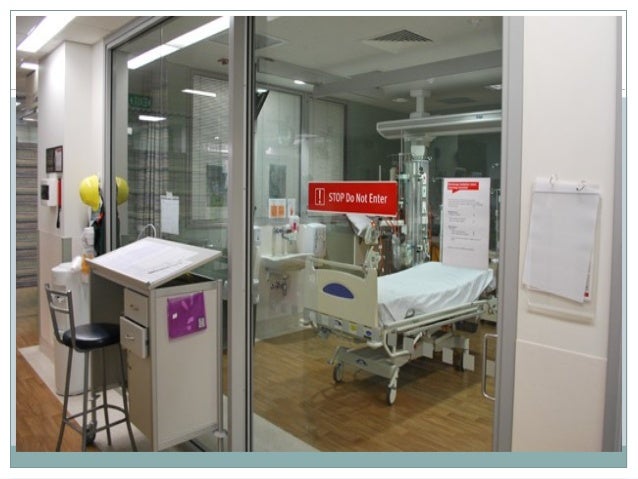 Strict procedures were observed by all staff and visitors. In an anteroom, we suited up in disposable body suits, N-95 respirators, gloves, booties, caps and face shields. In the window-enclosed space of these rooms, he was the alien specimen and we were his experimental captors, always watching. Sam made many comments about our isolation procedures. He thought them to be excessive. He had lived, after all, among people for many months with this infection. Granted, we did not perform any experimental procedures or attempt to remove Sam’s gallbladder, but it was clear that he felt like a specimen and an object, rather than a person. No one was eager to get to know Sam very well, as he was a surly, doomed individual. We had all seen his x-rays, and we all knew that his time in this world was quickly coming to an end.

Interestingly, the clinical staff at the hospital did not object to Sam’s enforced isolation. We were all fairly fastidious in adhering to our facility’s policies for airborne contagion. It took a lot of extra time and effort to do this, and our unit manager was sympathetic to this fact. She was careful to rotate the nurses assigned to his room each shift, and those who cared for Sam were given fewer patients than the other nurses in order to ensure that we would have the time we needed to observe these additional precautions.

Despite our long and intimate role in the daily activities of Sam’s final months, we did not, at any point, question the validity of the hospital’s strict isolation procedures.

We were not tempted to let him go, like the NYC Health Commissioner did for Mary Mallon. Despite his surliness and anger and sadness, we were not, at any point, tempted to break the rules and let Sam go for a walk outside. This is because, unlike Sam, we knew the suffering that this might impose on an otherwise healthy individual. If, through any negligence of carrying out our duties to ensure Sam’s continued isolation, we caused another person to become infected, we understood that this would be much worse than the annoyance and sadness we saw in Sam. More to the point, it would then be two individuals who must suffer this way, rather than just one. Furthermore, we knew that the immune-compromised individuals in our care were especially susceptible to contagion, and although we were not without pity for Sam in his isolation, logic prevailed and made any other option unthinkable.

The case of Mary Mallon is a controversial one because not only was the nature of the causative agent – the bacteria ‎Salmonella typhi – largely unknown at the time, but also because Mary did not require medical care like those suffering active infections of typhoid fever did. Mary was prohibited from living an otherwise normal life to save the lives of others. It is hard to appreciate the severity of a communal infection and its symptoms without actually witnessing it. Mary Mallon could not or would not accept the loss of her personal freedom for the sake of a public health risk that she didn’t fully understand.

As Sam’s condition worsened, his protests became fewer and then eventually stopped.

He expressed understanding, finally, of the isolation we had imposed on him. Because of his increased mental depression and this full understanding of the horror of tuberculosis in its late stages, Sam no longer wished to go outside or even have any visitors. Sam became increasingly lethargic and withdrawn, as dying people so often do. He no longer had interest in a world that he was no longer a part of.

The clinical staff at our hospital had all witnessed such a death before, some of us many times over. We knew the pain and suffering that accompanied deadly infectious diseases. Because of this, we knew, even in the beginning of Sam’s hospital isolation, exactly why these measures were absolutely necessary in a way that others could not. As healthcare workers, we are required to have TB tests annually, along with other tests and vaccinations. Some nurses have quit their jobs when faced with the proposition of direct exposure to deadly pathogens on a daily basis. When the Ebola outbreak of 2013 was announced, several healthcare workers at our hospital left their jobs for safer occupations. It no longer made sense to them to risk everything for the sake of caring for the sick. The preparatory instructional videos and practice sessions for our new Ebola contamination prevention procedures and equipment were daunting, to say the least.  Having witnessed the awful consequences of pathogenic contamination, however, I no longer have any doubt as to the validity of enforced isolation for carriers of pathogens such as Typhoid Mary. As Kevin Cahill from the NYC Department of Health has stated in the documentary “Typhoid Mary,” I believe that “depriving an individual of freedom for a brief period of time is a legitimate step to take,” as “civil liberties have to sometimes be bent for the public good.”